Gyoza Chicken Soup. But you can bottle it, and that's exactly what we did. Introducing a soup with nothing to hide. We don't leave taste to the imagination. 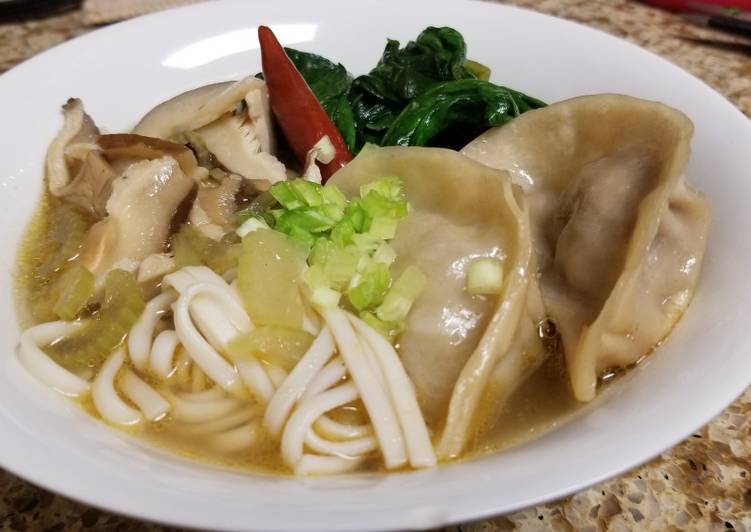 Gyoza is a type of Japanese dumpling, where the filling is usually a mixture of ground meats and cabbage with spices and seasonings that are wrapped in a thin wonton wrapper. Another way to eat gyoza, besides the classic pan-fried version, is to eat them boiled in soup! These gyoza are handmade from scratch, including the gyoza wrappers, so you know exactly what's in it and you can avoid the nasty preservatives that are added to the store-bought stuff. You can have Gyoza Chicken Soup using 13 ingredients and 5 steps. Here is how you achieve it.

You can prepare your dumplings in the soup or fry them as instructed on the package and eat them on the side. Mix all spices in a bowl (chicken bouillon powder, soy sauce, sake, salt, sesame oil). Cook udon in boiling water according to package instruction. In a cooking pot, add broth, ginger, pepper, salt, soy sauce and sesame oil and bring to a boil.

Also instead of water when cooking the gyoza you can use a watered down chicken or beef broth instead of just plain water, it gives the dumplings more flavor. Traditional Japanese soup made with a dashi broth, miso paste & topped with tofu and wakame. Put the broth, ginger, soy, wine, vinegar, sesame oil, sugar and salt in a soup pot and bring to a boil over high heat. Adjust the heat so the broth simmers and cooks to lightly flavor with ginger. Add the chicken and gai lan stems.